A collection of water crystal photographs “Message from Water” published in June 1999 an its explanatory
book entitled “Water Knows the Answers”(its English title is “Hidden Messages in Water”) published in
November2001 have been translated into various languages and received a tremendous resonance
among people all over the world during the past 10 years. I was able to meet many philosophers,
water researchers, scientists, religious persons, artists and spiritual leaders.
Thanks to this world-wide movement, I have been walking on the globe as a missionary of water
and giving lectures more than 1,000 times following the request of the people.During this period,

My faculties as a missionary of water have been developed year by year, and I have been received
all the more trust and expectation from the people in the world. At the beginning I was perplexed
because I was not sure if such a person without any scientific background as myself could be
at a position to lead the people in the world. However, the experiences I have had during the past 10 years
were really precious ones, and not many people could have done such experiences.
It seems to me that God has given me such priceless experiences and plenty of wisdom.
As a result, I have determined, since this year of 2010, that I make an appeal to the public in the world
that will contribute to achieving the world peace without hesitation.
My first appeal is about the “Water and Peace” Global Forum.

I chose Lake Biwa, the biggest lake in Japan sometimes called the mother lake of Japanese people,
as the place of dispatching the message. I organized a ceremony named “Thank you, Biwa Lake”
in the early morning on July 25 (Day out of Time according to the Mayan calendar),
1999, when the lake was notorious for its bad odour. As a result, there happened a miraculous phenomenon
that there were no phone calls of complaint about the bad odour only that summer from the local people,
although there had been more than 300 calls of complaint every summer in the past.
Currently, our world has a lot of difficult problems, and our future is unpredictable.
However, the abovementioned experiences, which I only felt that were provided by the will of God,
convinced me that the key to solving those problems is in the elucidation and understanding of WATER.
March 22, the last day of this forum, is the World Water Day declared by the United Nations.
I am convinced that, on this World Water Day, we can create a path to the world peace on this planet
by delivering the wisdom, which I have received from God during the past 10 years,
to the whole world with those wonderful scientists, artists, religious persons and spiritual leaders
who have shared it with me.

Would you please understand the concept of the event and join us in this event,
if possible in the 3rd dimensional level, otherwise in the 4th dimensional level?
Finally, the following people have helped us in organizing this event:
Mr. Eric Pearl (The Reconnection), Mr. Gudni Gudnason (The Modern Mystery School),
Mr. Hikaru Deguchi (Mekiki-No-Kai), Mr. Katsuhito Funai (The Funai Group) and Mr. Teruo Higa (EM Group).

We are grateful to each one of you.

Let us feel the vibration of water and learn the truth of water!
Let us dedicate our Love and Gratitude to the water!
Let us send our “Message of Water and Peace” to the World!

Schedule of the event:

Privilege: Participants will get Hado Instructor Certificate, CD rom which contains Dr.Emoto's presentation filles and the right to use the files for own seminars or workshops. The membership pin will be given too. 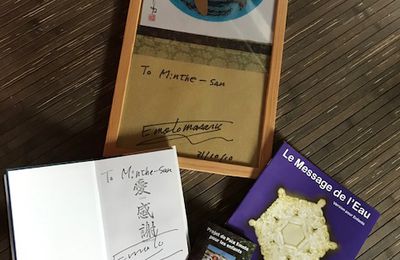